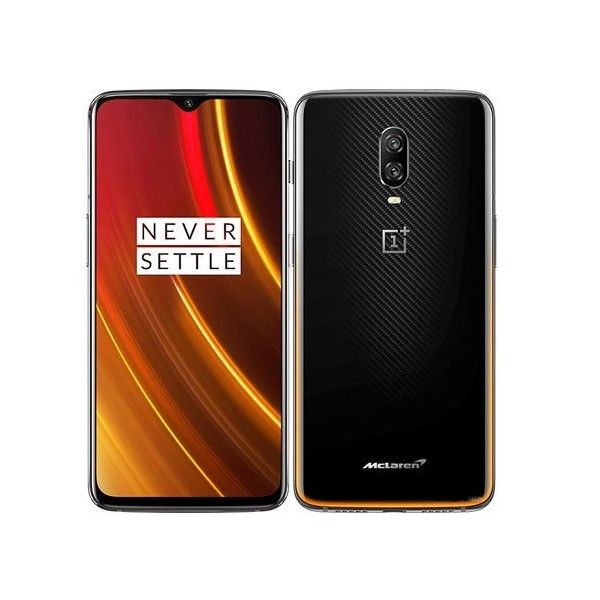 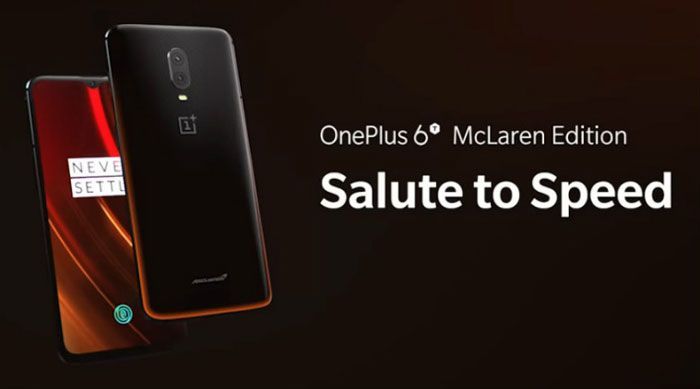 The flagship giant is entering the next round and proves once again that high-end smartphones do not have to scrape the 1000 Euro price mark. The OnePlus 6T once again boasts of only the best hardware such as the Snapdragon 845, a high-resolution AMOLED display, a powerful battery and an absolutely elegant case. This is a real blow to the face for the high-priced competition from Samsung, HTC, Apple and Huawei!

The McLaren Edition calls OnePlus "Salute to the Speed". In fact, the premium manufacturer does not make empty promises. The smartphones offers 10 GB RAM, which make multitasking possible even from fastidious Apps. At the same time, the special edition stands out visually. The orange stripe on the side is in the coprorate design of the racing team. The logo of the sports car manufacturer is emblazoned in noble silver letters on the back of the case. A real feast for the eyes - not just for racing fans! 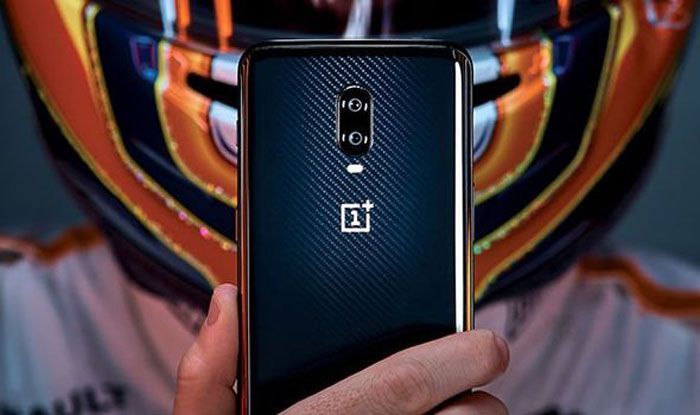 Extravagance at the price of a bar product

Quality and outstanding design do not have to cost more than the monthly rent of a small family apartment. OnePlus has impressively proven this with the latest offshoot of its series of flagship giants. The manufacturer is geared to the premium segment in terms of appearance and workmanship and leaves nothing to be desired. The casing is made of high-quality glass and gently curved. Despite a display with a size of 6.41 inches, the smartphone itself is surprisingly small. This is made possible by an outstanding screen-to-body ratio. Due to the rimless design and the narrow notch in drop shape, the mobile phone has compact dimensions of 157.5 x 74.8 x 8.2 mm. At the same time, the OnePlus 6T weighs in at only 185g. 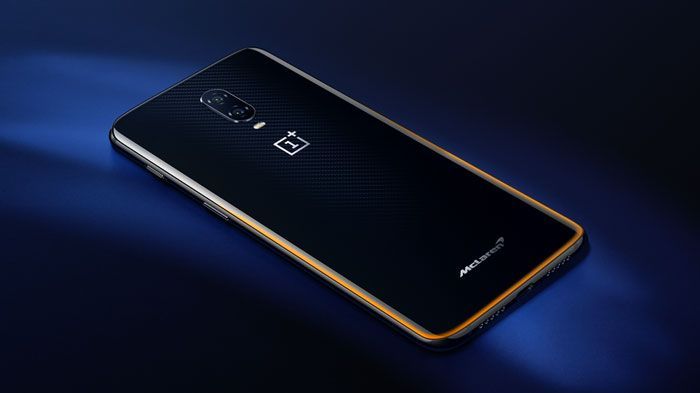 The interior of the OnePlus 6T is also very impressive. The core of the OnePlus 6T is the high-speed Snapdragon 845 processor, which operates at a clock rate of up to 2.8 GHz. This is supported by 8 GB RAM. Multitasking and current mobile games are therefore no problem at all for the strong duo. Furthermore, even future game configurations will not be able to exhaust the limits of the computing power of the OnePlus so quickly - so the smartphone will still be fully usable after more than two years. A 3700 mAh rechargeable battery has been installed to ensure that even longer gaming sessions and long working days do not require a pit stop at the power outlet. With WarpCharge, the battery can be recharged in record time. 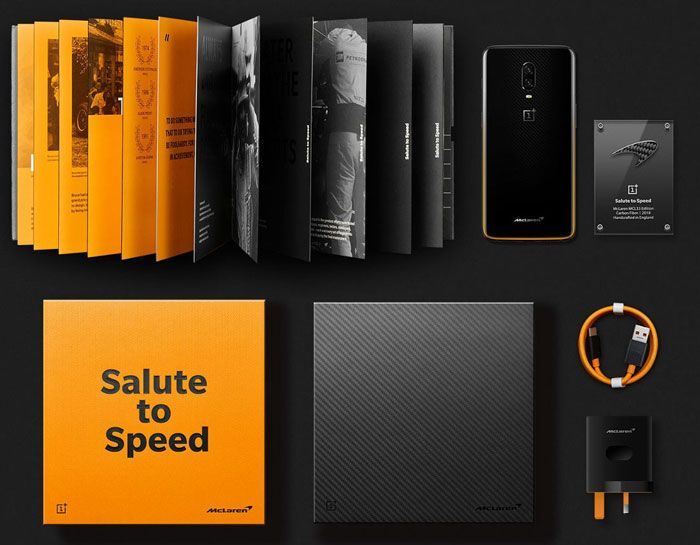 The OnePlus 6T also presents itself from its generous side in terms of the display. Like Samsung's flagships, this 6.41-inch technology gem is based on advanced and energy-saving AMOLED technology. This technology offers particularly lifelike and vibrant colors. At the same time, digital content is displayed in razor-sharp detail. With a resolution of 2340 x 1080 pixels and an aspect ratio of 19.5:9, photos and films can be enjoyed in a special way. Even occasional falls are no problem for the screen. The front is made of robust Gorilla Glass 6.

The SLR camera is somewhat bulky for everyday use. Fortunately, the OnePlus 6T is equipped with a more than powerful camera ensemble. Selfie enthusiasts will be pleased to see a high-resolution Sony IMX 371 sensor with a resolution of up to 16 megapixels and an f/2.0 aperture in the front, well concealed in the stylish Notch. However, the dual camera on the back of the elegant glass housing shows true proportions. The 16 megapixel Sony IMX 519 sensor is equipped with a f/1.7 aperture and offers both OIS and EIS. As a result, blurred images are no longer a problem. The main camera is supported by a 20 megapixel Sony IMX 376K sensor, which also offers an f/1.7 aperture. In dark environments, the camera duo is illuminated by a dual LED flash. The OnePlus 6T offers a special treat for hobby film-makers: The back camera offers not only 4k video recordings with up to 60 FPS, but also Full HD video with up to 240 frames per second. This enables breathtaking Super Slow Motion videos. If the resolution is reduced to the 720p standard, up to 480 frames per second can be taken.

As a matter of fact, OnePlus also offers an all-round successful package for the current model. The latest mobile radio standards, including Band 20, are supported by this technical gem. Within local networks, a rapid data connection to the network is possible due to the 802.11 a, b, g, n and ac standard and 2 x 2 MIMO. Smartwatches and other wireless devices can be connected to the OnePlus 6T via Bluetooth 5.0. Location services can also be used without restrictions. GPS, GLONASS, BeiDou and Galileo are known to the smartphone. The compulsory fingerprint sensor is also available. As befits a modern flagship, it is not located on the back of the case, but behind the display. The internal memory of 256 GB is also very generous. 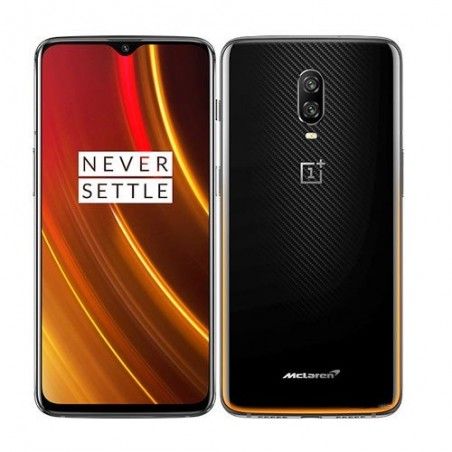 Notify me when the OnePlus 6T McLaren Edition - 10GB/256GB drops in price.